A short history of handmade tiles.

From King Zoser's stepped pyramid of Sakkara in Egypt to Nebuchadnezzar's Ishtar Gate in Babylon, decorative ceramic handmade tiles have been used by ancient civilizations to adorn palaces, tombs and important buildings. Around the 16th century, when tile art was reaching it's peak in the Ottoman empire, tile making experts began arriving in the New World aboard the Portuguese and Spanish galleons sent to colonise the newly conquered territories.

The art of ceramic tile making had arrived in Mexico

The use of tiles for decorative finishes on important buildings can be traced back as far as ancient Mesopotamia and Egypt. The fundamentals of the tile makers craft migrated via the peoples of Persia and North Africa, arriving in Portugal and Spain in the 15th century. 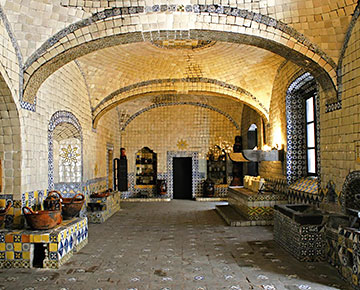 In the later part of the 16th century, when the foundations of the cities and towns of modern Mexico were being laid, craftsmen and tile makers from the "Old World" were encouraged to migrate to the "New World" to decorate the newly inaugurated buildings which were springing up at an astonishing rate.

The demand for decorative tiles was so great that these tile making experts were encouraged to pass their knowledge on to local peoples so that tile facades might be used throughout the country. Centres of excellence sprang up throughout Mexico but most notably in the two cities of Puebla and Dolores Hidalgo.

The hand made tiles supplied by The Mexican Hammock Company are from a small, family run workshop in Dolores Hidalgo, central Mexico. The traditional methods have been passed down from generation to generation and have remained essentially unchanged for the last 400 years. We have been working with the same tile makers for over 30 years. The attention to detail and the quality of the finished tiles are second to none.

The Mexican Hammock Company supports small worker-owned producer groups in Mexico and is an important outlet for many small Mexican enterprises. Our handmade tile business is a good case in point and helps ensure the survival of a small family of tile makers in central Mexico amidst the advancement of larger, factory-type tile operations. Try our drag & drop Tile Wall Designer and Tile Randomiser for hours of fun and beautiful designs.